I added player ranks to my Survival Minecraft Server using PowerRanks, a spigot plugin. This will hopefully boost my project’s sustainability.

My Setup and Reasoning

As you may already know, I run a server on the latest version of Paper. You can check out a detailed article on that by clicking this link.

The main issue at the moment is that players need more ways to spend the server currency (souls). I think if more features relate to souls, people will want them and recognize their worth. A currency has value only in the mind of the community after all.

I looked at the competition. What do other servers do? Apparently they give player titles in game. People love to stand out so much to the point that they give money for special tags or ranks.

This feature does not impact gameplay and it does not consume computer resources. Why wouldn’t I add it? It’s a really good way to consume souls and start up my economy.

Given my current list of plugins and compatibilities, I did some research and found this really cool plugin named PowerRanks.

The best part about the plugin is that it’s very user friendly. It works without too much fine tuning.

You can use Minecraft commands, an in game GUI (Graphical User Interface) or interactive signs. I went with the third option and added a post near spawn.

To give PoweRanks more credit, they developed an addon that lets you customize the server configuration in a web editor. It’s so intuitive that even my grandma could use it.

Here’s a link to the plugin. I recommend you check them out.

I want all my ranks to cost currency.

The server runs with a custom plugin for Vault economy. Up to this point, I hooked into the interface by using the plugin’s onEnable() method.

Apparently I should not have done that. PowerRanks checks if there’s a Vault connection way before that.

There’s an onLoad() method which runs way faster. So all I had to do is move my Vault initialization to the new place.

Another important thing to mention is that for every new plugin which works with Vault, you need to edit the plugin.yml file.

Of course you need to do this only if you coded a custom plugin for economy.

From my point of view, the plugin has only one flaw. When you place an interactive sign, it requires to have “PowerRanks” as the title.

If felt a little weird. In the configuration file, I can customize the title format. I can add anything in front of and behind %plugin_name%, but I can’t remove it.

From a programming perspective, it should be doable because you have the variable name title_format. You can use that to identify if the sign is interactive or not.

They are praised to have really good support on their discord server. I went there, talked with the developer and he said the feature will be implemented in a future version. All is good in the world!

Players can obtain up to 7 ranks by playing. Everyone starts as a Recruit and can upgrade using souls. Each rank up costs 1000 souls (server currency). All come in different colors and can be seen as a suffix in chat or on the tablist.

Another 3 ranks are distributed by server admins. Anyone that supports the server financially will get souls and a title as reward.

The last title available right now is [Admin]. This is given only in exceptional situations and can’t be bought.

The hard part was finding the right scripts and setting them up. I may do some fine tuning and add new ranks is the future or maybe change the price. Nothing is set in stone.

For the latest updates on my server, make sure you check out the change log.

Thanks for sticking with me until the end. If you have any questions or feedback please leave a comment down below.

I write these articles to spark conversation. If I get to motivate, help or connect with anyone, that's a win in my book. Everything here is free, but you can always buy me a beer: alurosu.com/donate
2 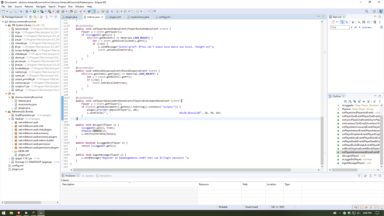 How to Add Vault Rewards to Minecraft Advancements using Java

How to Add Vault Rewards to Minecraft Advancements using Java